For police and local Aboriginal youth, the Flotilla of Friendship is a day of canoeing followed by a feast on Victoria Island.

The event is more than fun in the sun, though; Ottawa Police Chief Charles Bordeleau says it’s part of a larger effort by police forces to better connect with their communities.

“To put them in a canoe, to have them work together is sometimes a challenge,” Chief Bordeleau tells CFRA. “It just takes down a bunch of barriers and puts the youth and the police officer in a totally different setting.” 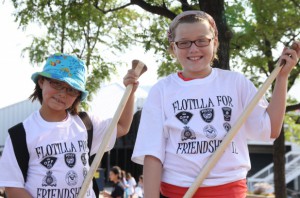 The canoe trip from Dow’s Lake to Victoria Island also allows the young people and the officers to ask questions and engage in conversations in order to better understand each other.

Police and aboriginal kids share laughs at Flotilla for Friendship

“The cops and kids are so competitive, but winning is not the point!” Kitchikeesic Juden said, running from team to team barefoot (she leaves her shoes in the car and stopped pretending she wore them a while ago). Still, the canoeing seems to build a bond between them that no program or message can, she said.

“Once they’re in the canoe, they’re paddling wildly along and suddenly, by accident, they paddle at the exact same time and they’re like ‘Whoa’,” she said.

To read the full article follow this link to the Ottawa Citizen. 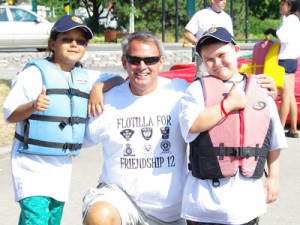 Friends. Theland Kicknosway, left, Ottawa police Insp. Pat Flanagan and Camden Nicholson getting ready to put paddles in the water at the 12th annual Flotilla for Friendship. The event pairs youth with members of seven different police forces in an effort to bridge the gap and create camaraderie as they paddle down the Rideau Canal towards the Ottawa River.

This is your Blog Sidebar, and no widgets have been placed here yet.

©2022 by Inuuqatigiit -- Centre for Inuit Children, Youth and Families | All Rights Reserved.